Flutes have been around for centuries. Modern flutists typically learn on the Boehm flute (first introduced in the mid-1800s), but its predecessors are still around today. Learn more about various historical flutes, including accurate reproductions that help flutists recreate the performance styles of the past.

This is the type of flute that Johannes Sebastian Bach would have written for. Many current-day flutists choose to study on wooden reproductions of the flutes that would have been available in Bach’s day.

Why Choose a Traverso Flute?

So why would you want to learn the Traverso as opposed to the modern Boehm flute? The sound quality is much different and, over the years, many techniques have been lost. Learning to recreate these historical techniques with reproduction instruments is known as “performance practice.”

Known as the recorder to modern flute students, the blockflute was once considered as valuable as the Traverso. Some historians believe that compositions with flats in the key signature were intended for blockflutes. Compositions with sharps, on the other hand, may have been intended for Traverso flutes. Today, recorders are often used as introductory instruments. With a decent instrument, novices and advanced players alike can use recorders for Baroque, modern, and even popular music. 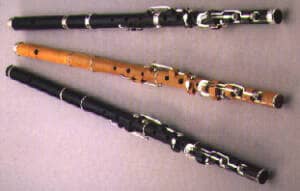 Whichever term you use, it’s the same flute. By the mid 1700s, the Traverso evolved to have a longer, more cone-shaped body. Several new keys were added to the body to eliminate cross-fingerings. Wolfgang Amadeus Mozart composed his music for this type of flute. The Classical flute has a wider range of sounds than the Traverso and its tone quality sounds less breathy.

With the advent of the modern Boehm flute in the mid 1800s, Classical flutes fell into disuse. Many wound up in attics and closets around the world. That’s where the Irish come in! They adopted the discarded instrument to play national tunes.